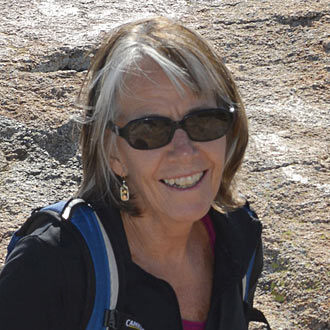 The Rillito River, a tributary of the Santa Cruz River near Tucson, Arizona | Image by Michael Bogan

Kathleen Velo and Michael Bogan have only recently teamed up through the 6&6 Collaboration, but they have wasted no time in getting their project moving forward. Forged by the Next Generation Sonoran Desert Researchers network (N-Gen, www.nextgensd.com), 6&6 is a collaboration between artists and scientists to explore the patterns and processes of the Sonoran Desert and Gulf of California. Velo explains, “We got a late start, because of different incidents and events that took place. We’re not rushing to catch up, we’re just flowing along and making sense of things as we go.” After an earlier collaboration didn’t work out due to diverging areas of interest, Velo and Bogan connected back in November. During their first meeting over coffee they discussed “if, and where, there were some natural connections” between their work, and found that a lot of their interests, and the scale they worked at, aligned very well. Bogan is an aquatic ecologist who researches how disturbances to ecosystems, such as wildfires, droughts, or mining spills, shape the types of species found in freshwater lakes and streams. Velo is a photographic artist who has been working with the topics of water and water flow for about seven years. Velo goes “directly into the source to create primarily underwater photograms that show some of the effects of the disturbances that Michael was talking about, to water sources.”